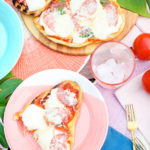 n the bowl of a stand mixer fitted with dough hook, combine flour, yeast, sugar, and salt. Start mixer on low speed and slowly drizzle water and oil, alternating until the dough forms a ball. Keep the speed on low and knead the dough for ten minutes until it forms a smooth ball. Remove the dough and pour a little olive oil in the bowl. Spread the dough around the bowl until evenly coated with oil. Cover the bowl with a towel and let the dough rest for one hour until it has doubled in size. While the dough is rising, make the tomato sauce. Add the tomatoes to the 3.5 Cup Mini Food Chopper and puree until smooth. Add garlic and salt and puree until well combined. Heat sauce in a small saucepan until boiling and then reduce heat. Let sauce simmer for thirty minutes and then remove and let cool.  After the dough has risen, punch down and turn out onto a lightly floured surface. Separate into three rounds and roll each out. Brush the top sides with olive oil. Heat grill to medium. Lay each piece of dough oil side down. Immediately brush top (the other side) with olive oil. Close grill lid and let bread cook for 4 minutes. Flip dough to let the other sides cook. Spread each with tomato sauce, then place mozzarella, basil, and genoa salami. Sprinkle each with assorted shredded cheese. Close grill lid and let the pizzas finish cooking and allow the cheese to melt (about 3 minutes).  Remove from the grill and enjoy!